CPU idle states and their impact on latencies

CPU idle states in Intel CPUs are referred to as C states. Each C state has a name, starting from C0 until the maximum number of C states supported. C states are generally per core; however, a package can also enter a C state when all cores in the package enter a certain C state. The CPU is in C0 when it is fully active and is put into any of the other C states when the kernel becomes idle.

C states with higher numbers are referred to as “deeper C states.” These states save more power but also have higher exit latencies. Typically the deeper the idle state, the more components are either turned off or voltage reduced. Turning these components back on when the CPU wakes up from the deeper C states takes time. These delays can also vary depending on differences in platform components, kernel configurations, devices running, kernel operations around wake, state of caches and TLBs. Also the kernel must lock interrupts to synchronize the turning on of components, clocks and updating the state of the scheduler. The delays can vary a lot.

The following sections discuss how we can tune the system so that we can limit the power saving capabilities to the point where these variable latencies (jitter) are contained within the tolerance of the real-time application design.

Detailed documentation of kernel parameters can be found at https://www.kernel.org/doc/Documentation/admin-guide/kernel-parameters.txt

isolcpus= cpu list. Give the list of critical cores. This will isolate the critical cores so that the kernel scheduler will not migrate tasks from other cores into them.

nohz=off. The kernel's “dynamic ticks” mode of managing scheduling-clock ticks is known to impact latencies while exiting CPU idle states. This option turns that mode off. Refer to https://www.kernel.org/doc/Documentation/timers/NO_HZ.txt for more information about this setting.

nohz_full=cpu list. Give the list of critical cores. This will enable “adaptive ticks” mode of managing scheduling-clock ticks. The cores in the list will not get scheduling-clock ticks if there is only a single task running or if the core is idle. The kernel should be built with either the CONFIG_NO_HZ_FULL_ALL or CONFIG_NO_HZ_FULL options enabled.

PM QoS is an infrastructure in the kernel that can be used to fine tune the CPU idle system governance to select idle states that are below a latency tolerance threshold. It has both a user level and kernel level interface. It can be used to limit C states in all CPUs system wide or per core. The following sections explain the user level interface. A detailed description of PM QoS can be found at https://www.kernel.org/doc/Documentation/power/pm_qos_interface.txt.

You can specify system wide latency tolerance by writing a latency tolerance value in micro seconds into /dev/cpu_dma_latency. A value of 0 means disable C states completely. An application can write a limitation during critical operations and then restore to default value by closing the file handle to that entry.

You can specify the latency tolerance of each core by writing the latency tolerance value into /sys/devices/system/cpu/cpu<cpu number>/power/pm_qos_resume_latency_us. The cpuidle governor compares this value with the exit latency of each C state and selects the ones that meet the latency requirement. A value of “0” means “no restriction” and a value of “n/a” means disable all C states for that core.

To disable all CPU idle states in CPU 3:

To remove all restrictions or revert to default:

Cyclictest is used to measure the latencies while turbostat is used to identify the C states that are selected and their residencies.

A detailed description of cyclictest options can be found at http://manpages.ubuntu.com/manpages/precise/man8/cyclictest.8.html

Some parameters are discussed below

-n – Use clock_nanosleep instead of posix interval timers

-h or –H – generate histogram. Takes a parameter to limit maximum latency to be captured

-t – number of threads to use

-i – interval in microseconds. This is the time the application is idle between operations.

-D – duration to run the test.

–laptop – cyclictest by default disables all C states using PM QoS. This option will stop it from doing that.

As explained above, you can use PM QoS to control the type of CPU idle states that the kernel selects when it goes to idle. The cpuidle governor compares the latency tolerance value registered through PM QoS with the hardware exit latencies of each CPU idle state and picks the one that meets the latency requirement.

Run cyclictest with the histogram option, and check the histogram for tolerable variations in the latency. Also check the other outputs such as maximum and average latencies to verify that they meet the requirements of the application.

This section explains the tuning of CPU idle state selection by adjusting the interval for which the application goes to idle.

CPU 3 is the critical core running real-time workloads. It is isolated and protected as described above.

At each point we can use turbostat to check the C states used in a CPU as follows:

Set PM QoS resume latency constraint to 0 (“no restrictions”). Run cyclictest with a high interval and capture histogram data in a file.

Generate a graph from the histogram data using any graphing tool, for example, gnuplot. 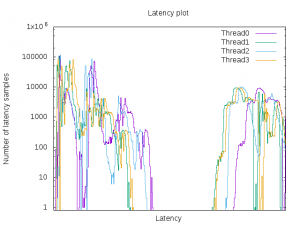 Note the maximum latency in this run for use in strategies to save more power discussed below. This would be the worst-case scenario that the application would take into consideration when it has idle times longer than this time and can decide to reduce restrictions saving more power.

Following is the graph generated from the histogram: 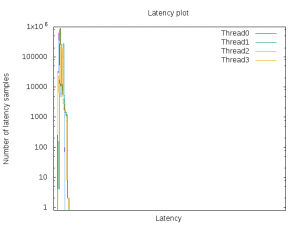 Cyclictest latency results and the histogram show that the latencies are not varying. Assuming this is the acceptable jitter level of the application, it should specify the corresponding PM QoS latency constraint value during critical operations and at other times remove the restriction to save more power.

For the purpose of demonstration, this example sets the maximum sleep time of the workload to 100 us. Only CPU idle states with target residency less than that will be allowed.

Note that the PM QoS latency tolerance value was reverted to “no restriction” for this run.

Following is the graph generated from the histogram: 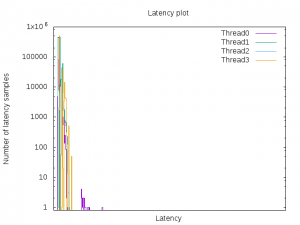 Latency results and histogram show that the latency impact is reduced compared to the initial run. If this jitter level is acceptable, the application should use the corresponding interval as the maximum time to idle during critical phases.

Using the PM QoS method, the application specifies a PM QoS resume latency constraint that ensures jitter stays within the maximum tolerance level of the application. To save more power, it reverts back to “no restriction” when there are no critical operations to be done.

In the idle interval method, the application uses the calibrated safe idle interval as the maximum period that it will idle at a time during critical phases. If it needs to idle for longer periods, it will make sure that the idle period before the deadline will not exceed safe idle interval size. It would take into consideration the worst-case maximum latency that was found in the “no restriction” run.

As an example, let us assume the worst case latency is 400 us and the safe idle interval is 100 us. If the application is waiting for 1000 us, it will wake up early enough before reaching the deadline to make sure there is room for the worst-case latency. In this example, it would need to keep a buffer of 400 us before reaching the 1000 us deadline. First it would wait for 600 us (1000 - 400). Once woken, it would check how much time is left to reach the deadline. It will sleep in chunks of 100 us or less for the remaining time to block C states with target residencies higher than the calibrated safe idle interval.

In the same example, if PM QoS method is used, then the application can increase the restriction in PM QoS during the critical phase (400 us before the deadline) and wait for the remaining time.

An application can optimize power saving during long idle times by reducing the restriction and allowing more power to be saved when it can. It can also save power while performing non-critical operations. A combination of the PM QoS and idle interval methods will facilitate different strategies to save power without compromising the application's real-time constraints.

CPU topology plays an important role on how the processor utilizes the power saving capabilities of the different C states. Processors have multiple cores and the operating system groups logical CPUs within each core. Each of these groupings has shared resources that can be turned off only when all the processing units in that group reach a certain C state. If one logical CPU in a core can enter a deep C state but other logical CPUs are still running or at a lesser power saving C state, the CPU that can enter the deep state will be held at a less power saving state. This is because if the shared resources are turned off, then the other CPUs that are still running, will not be able to run. The same applies to package C states. A package can enter a deep C state only when all the cores in that package enter a certain deep C state, when the package level components can be turned off.

When designing a multi-core real-time application, assign tasks to a cluster of cores that can go idle at the same time. This may require some static configuration and knowledge of processor topology. Tools like turbostat can be used to get an idea of the groupings.

Another area to consider is cache optimization. Deeper C states would cause caches and TLBs to be flushed. Upon resume, the caches need to be reloaded for optimal performance. This reloading can cause latencies at places where it was not expected based on earlier calibrations. This can be avoided by adding logic in the methods described above to also force the cache to get repopulated by critical memory regions. As the application wakes up from deeper C states earlier than the approaching critical phase, it can access the memory regions it would need to reference in the critical phase, forcing them to get reloaded in the cache. This cache repopulating technique can be incorporated into any general cache optimization scheme the real-time application may be using. The technique applies not only to C states but also to any situation where the cache must be repopulated.