The Zephyr Project is a neutral project where silicon vendors, OEMs, ODMs, ISVs, and OSVs can contribute technology to reduce costs and accelerate time to market for billions of connected embedded devices. The software is a perfect choice for simple connected sensors, LED wearables, modems, and small wireless gateways. Because Zephyr is modular and supports multiple architectures, developers can create a solution that meets their needs.

Pre Read If you are New to Zephyr: https://github.com/maksimdrachov/zephyr-rtos-tutorial

Project #1 Arduino module based on Zephyr

Arduino's popularity is renowned as a popular framework for providing a simplified interface to program embedded devices. Recently, Arduino adopted mbed OS as the base RTOS for some of their newer devices. With that work, they separated out Arduino Core as an independent abstraction layer from Arduino Core for mbed. This opens up the possibility for leveraging Arduino Core on other OSes.

The project idea is to create a Zephyr module that leverages the Arduino Core so that a developer can use Zephyr as the underlying OS when they use the Arduino framework on Arduino-compatible devices. The benefits to the user include:

Note 1: Arduino Core is licensed under the GNU Lesser General Public License and Zephyr is licensed under Apache 2. That means this project will most likely need to be developed out of tree and in a separate repo to keep code and license separation.

See #22247 for a historic discussion & soburi/arduino-on-zephyr for an earlier attempt prior to the Arduino Core architecture.

The contributor's task is thus:

Apache Thrift is an IDL specification,RPC framework, and code generator that abstracts away transport and protocol details to let developers focus on application logic.It works across all major operating systems, supports over 27 programming languages, 7 protocols, and 6 low-level transports. Originally developed at Facebook in 2007, it was subsequently shared with the Apache Software Foundation. 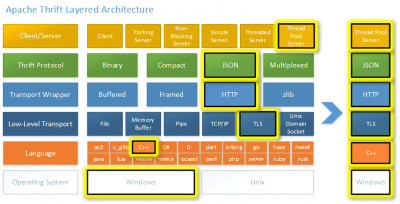 Supporting Thrift in the Zephyr RTOS would benefit the community greatly. It would lead to new software and hardware technologies, new products, and additional means for cloud integration. Thrift can be used over virtually any transport as well and for that reason, it is a natural choice for the many different physical communication layers supported by Zephyr.

The project idea is to get the proof-of-concept Thrift for Zephyr Module into shape for upstreaming. To achieve that, the contributor must:

Skills that are Required: Zephyr RTOS,C,CXX,Python